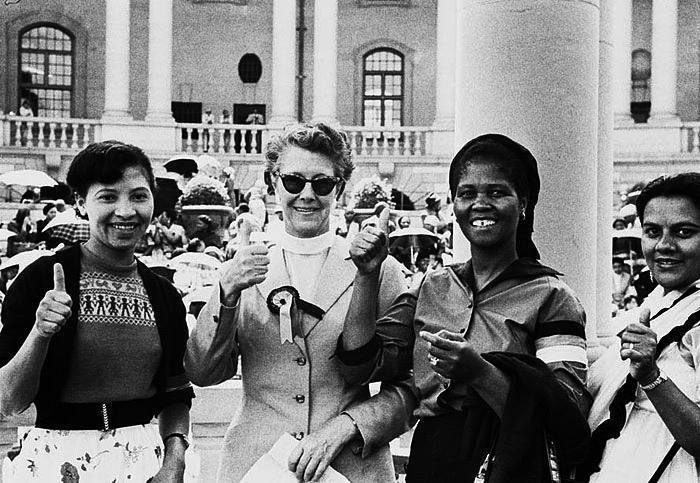 Sophia Williams-De Bruyn is the last living leader of the Women’s March.

On 9 August 1956, at the age of 18, she joined Helen Joseph, Lillian Ngoyi and Rahima Moosa at the head of a crowd of 20,000 women who marched on the Union Buildings to protest Apartheid pass laws.

In 1969, she left South Africa and went into exile where she played a key role in the establishment of the Solomon Mahlangu Freedom College in Tanzania.

Sophia returned to South Africa after the ANC was unbanned. Her work as a fighter for the rights of others continued as a member of the Commission on Gender Equality and as a Member of Parliament.

James April and his friend, Basil February, were among the first Coloured people to join MK, thereby recognising the common struggle of all black people in South Africa.

James was born and grew up in Bokmakerie, near Athlone, Cape Town. He attended Alexander Sinton High School. He later registered as a student at the University of Cape Town but dropped out after two years. In 1964, James and Basil went into exile.

They became members of the Luthuli Detachment of MK who engaged in the Wankie Campaign; a joint mission between the ANC and ZAPU (Zimbabwe African People’s Union). The plan was that the ANC guerrillas would assist their comrades to battle the Rhodesian security forces and would then move into South Africa. The last clash between the guerrillas and the Rhodesians took place on 4 September 1967. By then, some of the guerrillas had been killed, some had been imprisoned by the Rhodesian authorities and some had found refuge in Zambia or Swaziland. Others like James, found themselves in Botswana where they were arrested for being in possession of illegal arms.

Towards the end of 1970, James made a clandestine return to South Africa. He was arrested on charges of undergoing military training and attempting to overthrow the South African government through revolutionary means. He served a 15-year sentence on Robben Island. While in prison, he continued his studies and obtained a BA-degree.

James April was released on 10 May 1986 and returned to Cape Town after a 22-year absence. The government banned him from practising as teacher. After the end of Apartheid, he became an officer in the South African National Defence Force.

Harold Cressy was barred for racial reasons from studying at two universities in South Africa, despite gaining funding to pursue his studies. Abdullah Abdurahman applied pressure to the University of Cape Town to admit him. Harold graduated from the UCT in 1911 with a Bachelor of Arts degree. He was the first Coloured person to gain a university degree in South Africa.

In 1912, Harold was appointed principal of Trafalgar High School (established in 1910); the only school to offer secondary level education for Coloured learners. He co-founded the Teachers’ League of South Africa and was appointed president of the organisation in 1913.

Harold Cressy was 27 years old when he died from pneumonia on 23 August 1916.