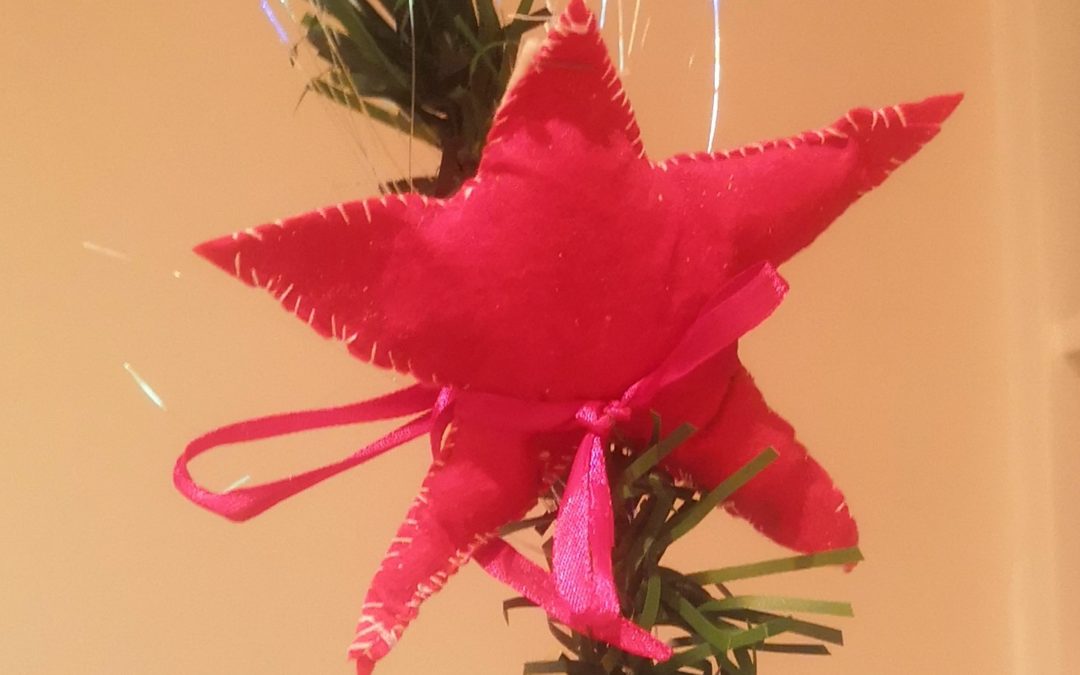 When I was seventeen, I found himself in Maynard Mall in Wynberg to do Christmas gift shopping. A shop assistant asked me, “Why do you look so sad?” If I tried to answer the question, I could probably come up with a few suggestions.

Perhaps it started with the conflict that was provoked by the religious nature of the season. The religion of my childhood and youth, taught me that I was in the world but not of the world. This meant that I was not supposed to celebrate Christmas like the rest of the world. In the absence of clear guidelines of how this was to be done, this certainly put a damper on things.

Christmas was a stressful time. It was marked by the demand to connect with people, which doesn’t come naturally to me. I mostly prefer to be alone. But Christmas is a time when I am expected to throw myself into the crowds, trying to buy the right gifts for friends and family, and, more than anything, demonstrate the joy of being with people.

Expectations were high and were often dashed. There was the pressure to buy followed by sinking regret after the purchase. I felt the world spinning out of control.

The Christmas story in itself is a sad one. A poor young pregnant woman traveling in discomfort, cannot find a place to rest. Turned away from every inn, she and her partner eventually find a place to sleep in a stable. In that stable, surrounded by farm animals, she gives birth to her first child. Soon after his birth, the little family are turned into refugees and have to flee across the border in order to escape a crazy ruler.

Today, this tragic tale is overlaid by the crass, commercial and extravagant celebration. As I shop for gifts and nice food, I am confronted by poverty – the hungry children who will not get presents, the desperate salesperson hoping to earn some commission on a last sale before the big day. In the media, I am reminded of the heartlessness of Trump’s America, oppression all over the world and injustices closer to home.

When I lost the shackles of religion, the temptation to replace Christmas with another celebration was great; the desire for clear guidelines on how an atheist should celebrate (or not) a religious holiday was intense.

I realise that a lot of my feelings around Christmas are linked to the pressure which I internalised.

But this year was different. I decided to stop worrying. What a relief that was.

I started the day by doing something simple: joining a great group of people, Running4Pads, to hand out sandwiches and sanitary pads to homeless people and refugees in the centre of Cape Town. What a great experience for the spirit.

I allowed himself to be caught up in my daughter’s enthusiasm for the holiday: fixing a homemade star to the top of the Christmas tree on Christmas Eve, helping Santa to eat and drink the cookies and milk left out for him before she woke up on Christmas morning… It was exquisite to just enjoy her delight and not to worry about anyone or anything else in those moments.

Christmas lunch was simple with people who I consider to be my extended family.

Then there were the meaningful connections that I made with people. I bought less (except for my daughter who was spoilt) and received less. But I was happier with what I gave and received.

I took time off and allowed myself to embrace the cultural and social significance of the day; beyond the religious and economic trappings. Christmas is what you make it to be.

My thoughts about Nelson Mandela are similar to thoughts that I have about my parents. They are best summed up by Breyten Breytenbach in his poem, “Wat die hart van vol is loop die mond van oor”[1]. Writing about his mother he says,

Today, the memory of Mandela that overshadows others is, on the one hand, attacked by militant youth and, on the other, celebrated by the privileged classes. The memory of him that is largely celebrated is that of the reconciliatory Mandela – the man who forgave his captors, who had tea with the widow of apartheid’s architect. The memory of Mandela, the revolutionary, who founded the armed wing of the African National Congress in 1961, is conveniently forgotten.

The result is that 25 years after the end of apartheid, we are still trapped in a situation where the so-called fears of the privileged few seem to count for more than the expectations of the majority. Little has changed in 25 years precisely because there has been a deliberate intention to make compromises. The World Bank GINI index still ranks South Africa as the most unequal country in the world.

There have been squandered opportunities over the past two decades. Corruption at various levels of government and misplaced priorities such as the spending of R30 billion on military weaponry in 1999. But there have also been failures to act in key areas such as land restitution, transformation in sport, and access to education. This failure to act is largely due to policies and practices that sought to appease the privileged few.

The gap between rich and poor is stark when it comes to access to schooling. There is the obvious divide between private schools and public schools. But even among public schools the levels of inequality are high.

No better example of excess can be found than a small and privileged public school in the southern suburbs of Cape Town – Rustenburg Girls’ Junior School. Between 2016 and 2017, Rustenburg Girls’ Junior School spent more R9.6 million on revamping its swimming pool facilities. Over the same period, the school spent only about R300,000 on bursaries. In 2019, the school dipped into its reserves and will spend just under R1 million on resurfacing its netball courts. Less than R200,000 is budgeted for bursaries.

This excessive spending on infrastructure at a public school happens in a country where many schools lack basic facilities such classrooms, electricity and clean running water. An audit in 2018 found that at nearly 4,000 schools the only available toilets were pit latrines. In recent years, there have been confirmed reports of four children who have died in such unsafe toilets – two by drowning. Many students in rural South Africa have to walk more than 20km each day to get to and from school. Many children drop out of schools because their families cannot continue to afford to provide the basic necessities such as food and clothing, and cover the costs associated with schooling.

To fund their lavish spending, Rustenburg’s annual school fees will increase by 6.5% from 2019 to R38,865 in 2020. This is more than what it costs for a year of study at many South African universities – for example, at the University of Free State it costs about R34,000 for a first-year of study towards a Bachelor of Arts degree. These fees are apart from other costs such as for several sets of compulsory uniforms – for winter, summer and sport.

School fees are an obvious means to exclude whole groups of people. Wealth is still very much distributed along racial lines in the country. So, it goes without saying that by keeping out those who cannot afford the high fees, schools such as Rustenburg keep out mainly black families. The school last released statistics on its student demographics in 2017. At that time, only 9% were black African and 19% were Coloured among the student body. Of the 51 members of the management and teaching staff, 16 (31%) were Coloured and only 2 (4%) were black African.

High fees are but one barrier to access at a school such as Rustenburg. The application of the school’s admissions policy is another. In this regard, there is a deliberate aim to retain dominance by a certain racial and cultural group. The fears of the dominant group is best encapsulated by a question posed by a member of the School Governing Body in August 2018: “Does anyone have any ideas on where we could pull data that debunks the myth of dropped standards if you take in people of colour or from a socio economic class lower than RGJS? There’s a perception that as soon as you bring in too many people of colour or people of a certain class then the academic standards of the school will drop.”

The other question is: “grace” for whom? This approach hints at not taking sides. In accepting the Nobel Peace Prize in 1986 Elie Wiesel said, “Neutrality helps the oppressor, never the victim. Silence encourages the tormentor, never the tormented.” No change, like delaying change, favours those who benefit from the status quo.

Why We Can’t Wait is the title of a 1964 book by Martin Luther King Jr. Like Mandela, King became a darling of white moderates after his death, and he is often held up as an example of civility to shame activists today. In this particular book, King cites the slow pace of school desegregation (after the Supreme Court ruled in its favour in 1954) as one of the reasons for 1963 having become a landmark year of the Civil Rights Movement in the USA. Central to the book however is “Letter from Birmingham Jail.”

“Letter from Birmingham Jail” was written in response to white religious leaders of the American South, who criticised King’s involvement in nonviolent demonstrations against racial segregation, and who appealed – in a manner of speaking – for him to adopt “a pace of grace.” King responded by saying:

History is the long and tragic story of the fact that privileged groups seldom give up their privileges voluntarily.

I have almost reached the regrettable conclusion that the Negro’s great stumbling block in the stride toward freedom is not the White Citizens Councillor or the Ku Klux Klanner but the white moderate who is more devoted to order than to justice; who prefers a negative peace which is the absence of tension to a positive peace which is the presence of justice; who constantly says, “I agree with you in the goal you seek, but I can’t agree with your methods of direct action”; who paternalistically feels that he can set the timetable for another man’s freedom; who lives by the myth of time; and who constantly advises the Negro to wait until a “more convenient season.”

The views of those who speak for change at schools such as Rustenburg Girls’ Junior are dismissed as the views of a minority. This is not surprising since the majority benefit from the status quo.

Schools like Rustenburg Junior does a great disservice not only to black students and staff but also to its white students and staff. By stubbornly insulating itself from change, it robs all of its community the opportunity to be part of a new dawn and, in fact, to be an example to other institutions about how change can be brought about.

More than 70 years ago, in the early days of official apartheid, another moderate sounded a warning: “I have one great fear in my heart, that one day when they turn to loving they will find that we are turned to hating.”[3]

[1] Out of the fullness of the heart the mouth speaks.

[2] I cannot write an angry word about you, though it is the fashion to destroy the sandcastles of childhood and to spit upon the graves.